TWO STORIES, ONE MONTH, A BLOG, and ME.

STORY ONE: A Love Less Ordinary

The first is a contemporary piece about the Murphy’s Law of relationships. Protagonist’s best friend and roommate kicks her out of her own apartment because she and her deadbeat fiancée (the freeloader who never paid rent) are ready to take the next step.  This on the same day she’s laid off from work. Dodging questions from her mother about her career and love life, she just wants out of her current situation. Unemployed, newly homeless, and desperate for work, she doesn’t realize how lost she is until she ends up working as a live-in nanny for a family that’s just moved to town. At least there’s the cute guy she sees at the deli every Tuesday. Their sandwich banter is something she looks forward to. On this Tuesday, however, after all that happens, she misses her deli run and ends up at some family’s dinner table, hired on the spot, after saving the young son when he ran into the street. Things start to look up until her new employer’s husband walks in, holding a big bag of sandwiches from the deli.

This one’s a beast to get into. The gist is that it’s a YA Speculative Fiction piece, a riff on fairy tales, hopefully unlike what’s already out there. First off, I’m focusing on a fairy tale that isn’t saturated in the media, at the moment, the Pied Piper. In my story, the Piper is female. In this fairy tale universe, heroes are villains, and vice versa. Aside from characters you may know by name, circumstances are quite different as the story unfolds. Other notable fairy tale characters from classic and contemporary authors alike might make an appearance but in this land, nothing is what it seems.

That’s what I’m writing about in April. Well, the major writing projects for April, that is. Since the Blogging Challenge is thematic, I’ll try to keep it writing related, as much as possible, and hopefully slip in some word count updates. Otherwise, I’ll be keeping everyone apprised of my story progress each Sunday (the day we have off from the blogging challenge).

So, today was a lovely sunny day. Since I live in the vicinity of Raincouver, I don’t trust it. I bet there’s a rain cloud waiting to leap out from behind a tree.

Tomorrow it begins. To borrow from a phrase of an awesometastic program premiering its third season tonight,

And plenty of them, if I can help it.

I suppose this is where I make the choice. Do I stay the course or head back to shore? Heck, I didn’t even know I was on a boat, but here we are. [cue JAWS score]

Was this how Neo felt when given the choice of the red pill or the blue pill?

“You take the blue pill, the story ends, you wake up in your bed and believe whatever you want to believe. You take the red pill, you stay in Wonderland, and I show you how deep the rabbit hole goes.”
— Morpheus, The Matrix

As writers, do we not tread the fine line between reality and the real world on a daily basis? Neo was The One. That meant squat in the end… oops. SPOILERS. I will speak of this no more.

I swallowed that red pill, bitter taste and all, back when I decided to do this trifecta of writing awesomeness: Camp NaNoWriMo, Savvy Authors April Boot Camp, and the Blogging A to Z Challenge. That pill swirled around my gut and my hand did the T-1000 morph the moment I Tweeted my declaration of the write-a-palooza.

I’m not doing this because I’m a masochist–writers are inherently so. I’m doing this because I know I can. Hundreds of thousands of creative folks know they can, too, or at least they’ll give it a try. We’ll support each other. I’m doing it for the global frenzied encouragement as much as I’m doing it for my own writerly goals. It’s just a matter of how far I’m willing to push my creative self down the rabbit hole.

Care to join me? 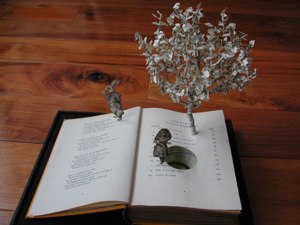 2 thoughts on “T-Minus… We’re on the Precipice, the Calm Before the Storm”